A Short History of Jewish Handwashing

In honor of Global handwashing day, I thought I’d post a short summary about the history of Jewsh Handwashing, which starts at Sinai and winds all the way to the present. In reality there is a lot more than just this. I could make a dissertation about it. This is based on a letter I wrote to a colleague who asked me about it.

Ready for a wild ride?

Biblically, the first direct mention of Washing of the hands is in Exodus 30:18-21, which instructs to make a handwashing station and to use it, with an interesting reason:

17. And the Lord spoke to Moses, saying, 18. You shall also make a basin of bronze, and its pedestal also of bronze, to wash with; and you shall put it between the Tent of Meeting and the altar, and you shall put water in it. 19. For Aaron and his sons shall wash there their hands and their feet; 20. When they go into the Tent of Meeting, they shall wash with water, that they die not; or when they come near to the altar to minister, to burn offering made by fire to the Lord; 21. So they shall wash their hands and their feet, that they die not; and it shall be a statute forever to them, to him and to his seed throughout their generations.

Here God is clear: Wash your hands or face the possibility of death. Can't get better than that. Supposedly it was one of the sins that caused Aaron’s sons to die in Leviticus 10. Let me point out something most who haven’t read all of Leviticus or Exodus wouldn't know: The burnt offering in many, but not all, cases had some parts that were roasted on the fire then eaten by the priest making the offering. In short the priest was cooking, and was required to wash his hands prior to food p 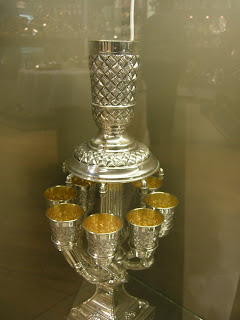 Solomon By the way went wild in his hand sink system for the Temple in Jerusalem in I Kings 7. It included, if I did the math correctly the "sea" (i.e. water retention system) that could hold somewhere around 1700 gallons of water. And there were ten water basins, presumably the handsinks filled by the "sea". Today a similar device, though much smaller, is used to dispense wine on the Sabbath in some Orthodox homes.


Leviticus 15:11 mentions handwashing in terms of contamination with a person who has a "discharge" which many modern scholars believe to be Gonorrhea:

11. And whoever he, who has the discharge, touches, and has not rinsed his hands in water, he shall wash his clothes, and bathe himself in water, and be unclean until the evening.

Biblically at least innocence is often associated with the washing of the hands as in Deuteronomy 21:6-7 for the ritual of the case of an unsolved murder. The prophetic literature (e.g. Isaiah 1:15-16) and psalms follow suit but even more metaphorically.For example Ps. 26:6 “I wash my hands in innocency; so will I go around your altar, O Lord!” I’m not sure since that’s “out of my jurisdiction”, but Pilate’s comment might be based on this concept.

After the destruction of the temple nineteen hundred and twenty three years ago, there was a change. Since there were no more sacrifices, then the Temple practices were transferred to some other place, in this case the dinner table. Since the Bible said the priest was to wash the hand prior to sacrifice, when the temple’s sanctity was transferred to a man’s dining room table here too he washed his hands before blessing anything and then eating.

The Talmudic Rabbis did a lot with handwashing, even writing a whole tractate of the early part of the Talmud called Yadayim (in translation “hands’) all about handwashing, how to do it, what was considered clean water to perform the procedure etc.

“Hand washing” as A phrase occurs 345 times in the Talmud (approx 70-500 CE) so its importance was paramount. There is even a case where a man was excommunicated for doubting the sanctity of handwashing [Ber 19a]

I could give you all 300 some cases, but I’m not Here’s a few choice ones note the prevention of the fecal oral route in the first one, which is a sequence of things to do when one gets up in the morning:

R. Johanan also said: If one desires to accept upon himself the yoke of the kingdom of heaven in the most complete manner , he should consult nature then wash his hands then put on tefillin then recite the Shema’ and say the tefillah:(i.e. the morning prayers) this is the complete acknowledgment of the kingdom of heaven. R. Hiyya b. Abba said in the name of R. Johanan: If one consults nature and washes his hands and puts on tefillin and recites the Shema’ and says the tefillah, Scripture accounts it to him as if he had built an altar and offered a sacrifice upon it, as it is written, I will wash my hands in innocency and I will compass Thine altar, O Lord.[Ber 14b]

Our Rabbis taught: R. Akiba was once confined in a prison-house [By the Romans] and R. Joshua the grits-maker was attending on him. Every day, a certain quantity of water was brought in to him. On one occasion he was met by the prison keeper who said to him, ‘Your water to-day is rather much; do you perhaps require it for undermining the prison?’ He poured out a half of it and handed to him the other half. When he came to R. Akiba the latter said to him, ‘Joshua, do you not know that I am an old man and my life depends on yours?’ When the latter told him all that had happened [R. Akiba] said to him, ‘Give me some water to wash my hands’. ‘It will not suffice for drinking’, the other complained, ‘will it suffice for washing your hands?’ ‘What can I do’, the former replied: ‘when for [neglecting] the words of the Rabbis one deserves death? It is better that I myself should die than that I should transgress against the opinion of my colleagues’. It was related that he tasted nothing until the other had brought him water wherewith to wash his hands. [Eiruvin 21b]

There was also some demon superstition associated with handwashing:

R. Judah the son of R. Hiyya said: Why did [the Rabbis] say that it was a bounden duty to wash the hands after the meal? Because of a certain salt of Sodom which makes the eyes blind.2 Said Abaye. One grain of this is found in a kor of ordinary salt.[Hullin 105b]

Suffice it to say that handwashing was a critical part of Jewish practice. One story tells of a Jewish innkeeper during Roman times who kept himself hidden from the Romans. He identified Jews by who washed their hands. If someone washed their hands he served Kosher lamb or beef. Anyone who didn’t he served pork.
Be aware ritual hand washing was not completely sanitary and didn’t make sense from a public health standpoint all the time though. There is always the shared pitcher shown on the right in the photo. Even today the ritual does not require soap, as can be seen missing in this hand sink in the Tel Aviv Sheraton. Anyone feeding someone else does not have to wash their hands for example, which has led to several cases among the Satmar sect of Hasidim in New York State having outbreaks of shigellosis. 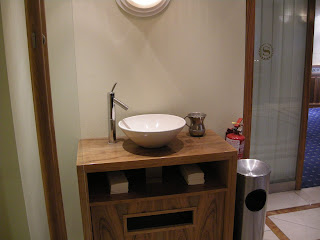 I haven’t researched the period of the inquisition, but it would not surprise me if this was a way to identify non Christians who would the only ones so obsessed with handwashing due to its spiritual nature. I don’t know a lot about Islam but I do know that the Koran (5:6) as well had requirements for Muslims, with a requirement almost identical in language to Ber 14b in the Talmud of washing up before prayer, though in their case any prayer. Those who washed their hands were most likely observing other religious practices: Jews and Muslims. I don’t know about handwashing practices of Christian or orders like the Jesuits who the Inquisition picked on as well.

Hope that’s enough to keep you busy. If you have any other questions, let me know.
Posted by Steven Lipton at 1:16 PM

I am still in the dark about the design for the handwashing cup. Why the two handles at approximately 45 degrees? I would appreciate the answer if anyone can give it. Thanks,missydad@juno.com

I'm not 100% sure and need to check out the sources, but this would be a case of preventing cross-contamination. If you had two dirty hands, to handle a pitcher with one handle means you would have to touch a clean handle with a dirty hand while pouring and then touch that same handle with the clean hand to pour water on the second dirty hand, recontaminating teh first hand. Two handles prevents that from happening.